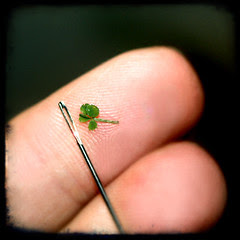 I was working on some product photos outside yesterday...taking advantage of the mild weather before the rain here in Ohio, when I noticed this wee baby clover peeking out from under the dead grass & fallen leaves.
I probably would have missed this one if I wasn't nearly mushing my nose into the ground & taking pics with my macro lens.
I try to photograph all my four leaf clover jewelry outside. I think the photos come out much better in the natural lighting, besides...I'd rather be outside enjoying the sounds & smells of nature. Pretty soon it will be too cold for me to enjoy it & the snow will blanket the earth & all the green leafy smells will hibernate until spring.

Posted by Hello there! My name is June 2 comments:

What to do with Thanksgiving leftovers... 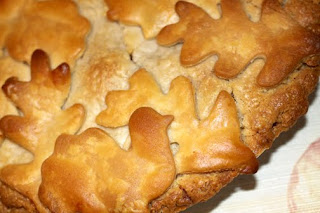 This is so easy & incredibly yummy! I always have to come up with different ways to disguise Thanksgiving leftovers, because my husband doesn't like to eat the same thing meal after meal.

You can either make your own crust or take a shortcut & use ready made pie crust shell...like I did.
Cut up leftover turkey into bite sized pieces & put in the crust-lined pan. Add any leftover veggies....that green bean casserole works like a charm!
Pour gravy all over the top & for the upper crust, take a cookie cutter & cut out various shaped pieces to make it wicked pretty.
I used an oak leaf, a maple leaf, and a turkey.
Place them on top & be sure to overlap the edges & pinch together a little. 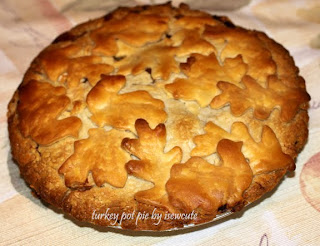 Note that I did put foil underneath on the bottom rack to catch gravy drip overflow.

It was good & the hubby loved it! 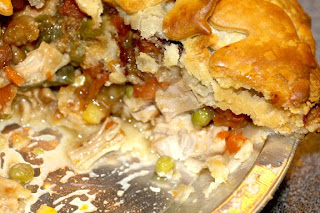 Posted by Hello there! My name is June 1 comment: 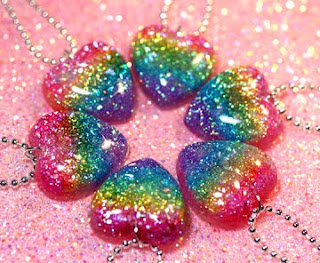 I love how this new batch of resin rainbow glittery heart necklaces turned out. 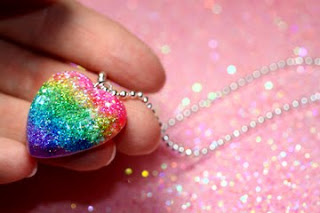 We had a very mild sunny day over the weekend & I was inspired to create something very bright & colorful after all the fog & drizzle we've had in Ohio. I'm so glad I worked on these rather than just sitting at the computer listing other items. As a creative, it's important to create when the inspiration strikes. 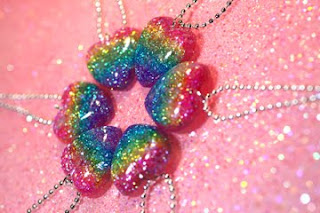 I love this photo from when I was giving the pieces a bath after sanding them. The rainbow bubble combination is fun! 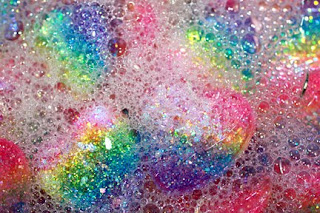 Posted by Hello there! My name is June No comments: 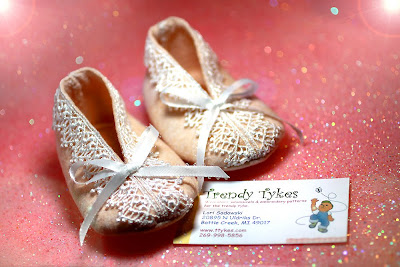 I was lucky enough to be chosen as a winner of these adorably wonderful handmade baby booties that Lori calls 'Piggy Pouches' ...isn't that the cutest name for baby footwear? As a thank you to Lori, I wanted to share with you her wonderful shop ...especially this time of year when we're looking for that 'perfect' gift for a new baby or toddler.

Trendy Tykes has a couple of fantastic new items that are perfect for Christmas! A cute Santa Claus placemat for the cookies & milk. Also, a lovely ruffle layered apron...perfect for a holiday hostess!

Please check out Trendy Tykes to see if Lori has anything that would be a good fit for your holiday shopping needs. It's important to support a crafty mom's small business & I'm sure you'll be glad you did!

Trendy Tykes is having another giveaway right now for a chance to win a sweet little embroidered whimsical tooth fairy pillow by being their 500th follower on twitter!

With the holidays fast approaching, I'm already out there doing my Christmas shopping & have been also listing new items to the shop daily. I have a ton of new designs waiting to make their debut! Most are one of a kind even...so would make a perfect unique gift for that someone special! 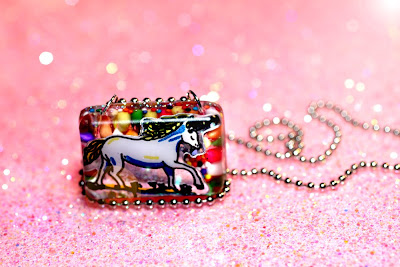 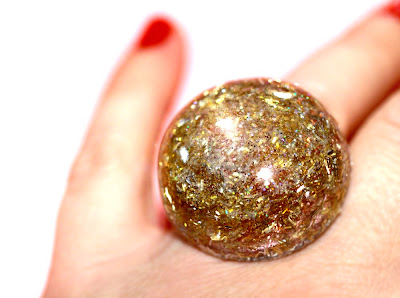 ...and yesterday I listed this kawaii little violet deer in a sparkly winter wonderland heart necklace. 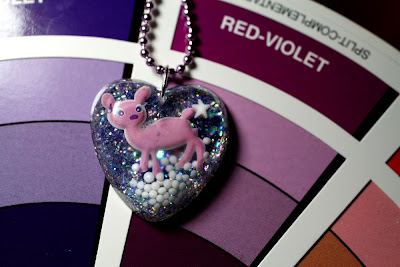 More to come!
Stay tuned!
Posted by Hello there! My name is June 1 comment:

I've been so wildly busy the past couple of weeks from making the Halloween costume & then jumping right in to a few freelance toydesign gigs, that I've been sorely neglecting my posts here!
Well, this is certainly worthy of an update as I had a tremendously fun mail day yesterday! I received my hoops from MizzKodak!!! Aren't they fantastic?!!! I'm going to hang the yellow/blue one in the craft room & the other will go in my babygirl's room. I'm working on a quilt for my daughter & it will coordinate so nicely on her wall! 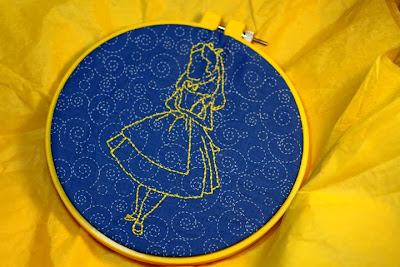 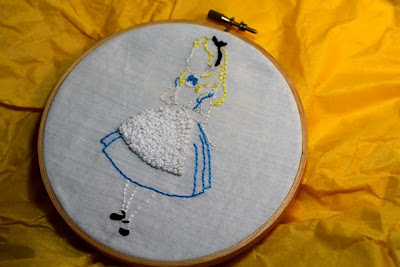 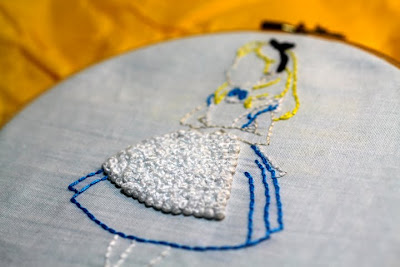 Here is a link to the gallery on craftster... there are so many fantastic & inspirational hoops in this swap! http://www.craftster.org/forum/index.php?topic=362394.0

A HUGE thank you to MizzKodak for making these fantastic Alice in Wonderland hoops for me & my girl! We'll give them a good home!

Cheers!
Posted by Hello there! My name is June 1 comment:

My boy had a handmade Halloween! 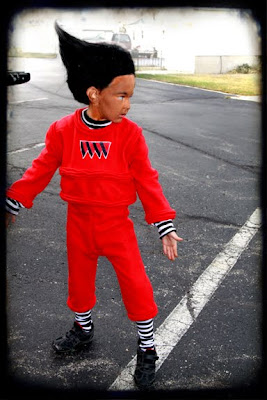 About a month ago my boy was watching our dvd of Tim Burton's Willy Wonka & really liked, or rather, became obsessed with the oompa loompas & their songs & dances throughout the film. In the bonus features on the dvd you can learn to do 3 of the different dances & there's a sequence where you can 'dance forever'. My boy has been dancing ever since and asked begged me to make him an oompa loompa costume. Therein my dreams of him being a mini 'Dr. Horrible' were shattered... and I gave in to his pleading puppy dog eyes.
Good thing Halloween was coming up, so I had a real good excuse to go out & buy fabric.
The pattern was drafted loosely based on some clothes my boy already had.You can see he's waiting oh so patiently while I cut out the pattern pieces: 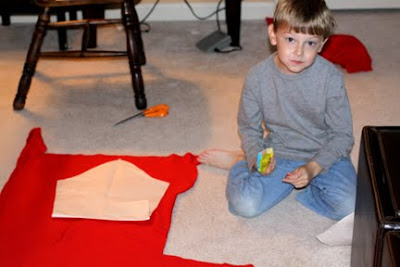 He's wearing cut off tights as socks...and with the extra fabric not used for the socks, I constructed the cuffs and collar. Sadly the only photo I took during construction was this part where I'm inserting the cuff into the sleeve: 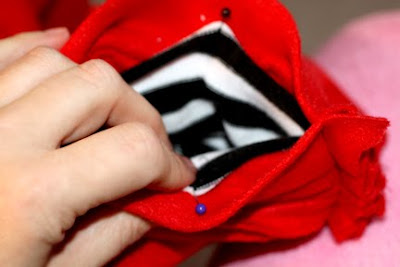 The little triagle thingie on the front is applique & sharpie-colored felt. The whole thing pulls on like a jumpsuit...and has a velcro closure in the back. My little man hates having anything put on his face, but was so excited to have makeup on ...that was scary for me....knowing that eventually we would have to wash that crap off. We were able to wash most of it off that night & the rest wore off by Monday thank goodness...but he's home from school with a fever anyway.

The wig is an altered store bought rockstar wig. I didn't have any time left to knit him a hat as I'd originally planned. Oh well... so many crafts & never enough time!

He had so much fun...it was worth everything we put into it!


Oh, and here's a reference photo...in case you're not familiar with the character: 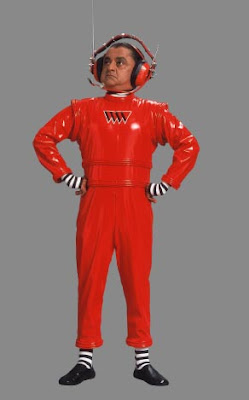 I posted this over on craftster... and if you'd like to see some fantastic handcrafted costumes...you've got to check out their October craft challenge!

It's very cool! I know we won't win, but the happiness my boy has from living his dream is worth more than winning any contest!

Cheers & Stay crafty!
Posted by Hello there! My name is June 1 comment:

Hello there! My name is June
I'm a crafty gal who lives in Ohio...raising 2 young children with my husband. We have the cutest house bunny, Yuki! I heart craftster dot org...if you haven't visited the site, for the love of everything creative...go, man go! I make stuff...lots of stuff! Toys, Dolls, Jewelry, Drawing, Knitting & now Crocheting, Sewing, Sculpting, Painting, & Wood Carving. I'm a toydesigner, illustrator, aspiring author, & excellent cupcake baker! Now enough about me... what about you? :o)

Visit my etsy for the cutest resin jewelry! 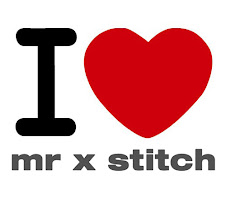 I Love to Create! 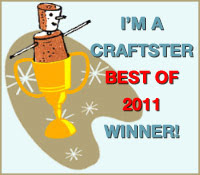 Please note that all my photos & designs are Copyright ©2008-2015 by June Jessie "isewcute" You may not use this copyright-protected work...including my designs, words, & photos in any manner without express written permission by me, the artist. Thank you.